The show season in the local area has been a fun one so far this year. We started it off with a bang at the Automotion show in WI Dells. The 1949 Chevy Pickup 3100 made it's debut there. We have to admit that the truck was on a trailer to get to the dells and then driven onto the show grounds. Why you might ask? The truck's top speed is about 45mph and the roads to the Dells are less than smooth. The 216 and 3 speed on the column are great! The challenge is with the ruts in the roads that are barely wider than the white wall tires.

This little green truck attracts a lot of big attention. Young and old are drawn to it. Most of the trucks that are shown of this era are modified. This one however is stock. The only things that were changed: gas tank relocated to beneath the bed at the far back of the truck, conversion to disc brakes and it has seat belts(which we keep getting flack for from some of the most nostalgic viewers, but it is safer and the owner is a retired paramedic and firefighter). People seem to enjoy the time warp they experience when they admire a truck that looks like it's straight out off the 1949 showroom floor. It is just as much fun to ride in as well. "Everybody waves!" says Pat, one of the owners.

Pat and Paul Sharpe bought the truck from a little town in Northern WI because Paul always wanted a 5 window 1949 Chevy. It shares the birth year of both of it's owners, not to state their age publicly or anything but that's the honest reason they got it. It was in red primer and it did run but was in need of a whole lot of attention mechanically and cosmetically. After being trailer to the shop the dis-assembly made it look a little more challenging yet. Some of the repairs done by previous owners were using tar and newspaper to fill instead of metal. The bed was used for oily parts storage as well. All the bed boards were there and although stained with oil they appeared salvageable and Paul took them home to refinish them. They turned out beautifully. The rest of the complete frame off restoration can be viewed through our photo gallery at: http://www.drivenrestorations.com/dr-gallery.php?id=1

So far this year the truck has been to 3 shows with the following results:
WI Dell's Automotion- Top 6 Truck, Stock (Pictured here with shop owner Steve Gursky) 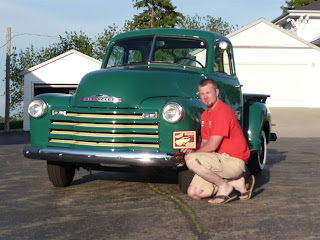 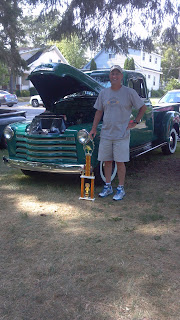 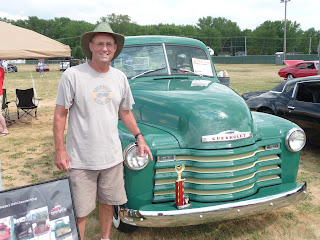 Congratulations to the owners! The positive remarks from spectators and judges are too numerous to mention but one stands out: "I hope you have a room big enough for all the trophies that thing will win"- fellow car show participant.

Next one on the docket is Fox Lake on July 28th (and maybe one or two in before that if time allows).